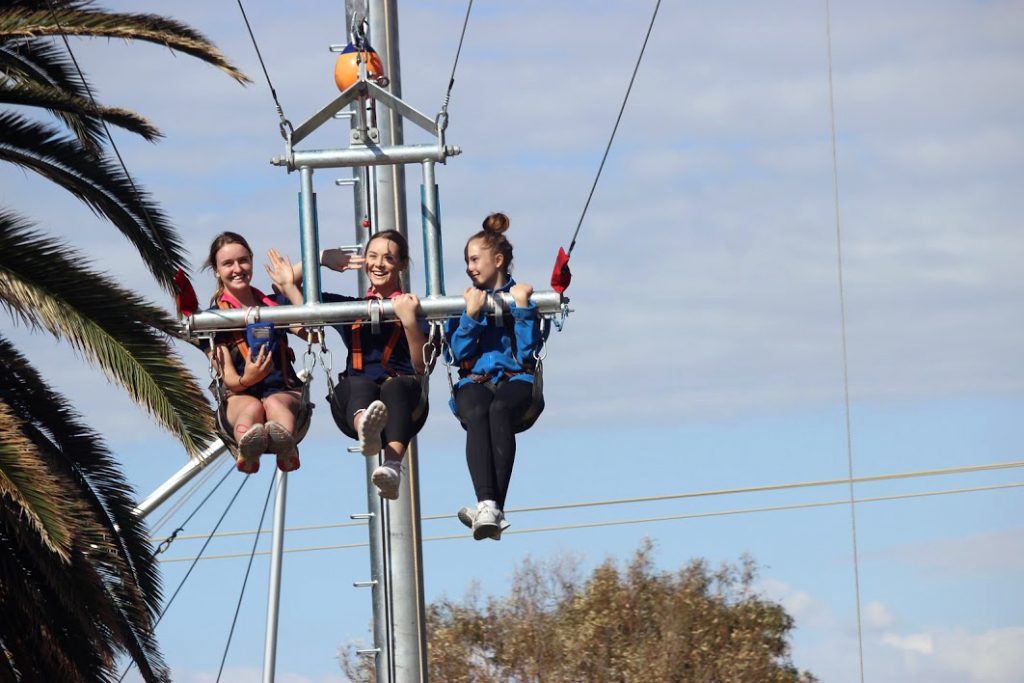 The Holidays are in full swing at Mega Adventure with the addition of their new 18M GIANT SWING!

Lazing by the pool this summer just got a whole lot less interesting when the alternative is a heart-pumping 18m Giant Swing experience at West Beach! That’s right, ban all screen time, hop in the car and take your holiday activities to new heights!

The new Giant Swing combines the thrill of swinging fast and high through the air with gorgeous ocean views, an activity sure to get the adrenaline racing.

We’ve featured Mega Adventure in our “57 Things to do in Adelaide with Kids” article.

“The swing is something we’ve had in mind since we opened the park and we think our guests are going to love it, it’s quite a thrilling experience,” he says. “It’s been inspired by some successful rides in New Zealand.”

Riders are strapped into their seat at ground level, before being winched up to 18m off the ground where they release the swing. Expect squeals of trepidation and delight!

Both the swing and top of the SkyChallenge rewards climbers with beautiful 360-degree views taking in the ocean, city and Adelaide Hills.

“The SkyChallenge takes several hours so the great thing about the Giant Swing is that it’s a shorter experience for people who don’t have much time,” Mr Grundy says.

“The swing takes about half an hour with the ride itself lasting just under 10 minutes, so it’s an opportunity for more people to come and enjoy our park.”

Mega Adventure is now celebrating its third birthday and has become a popular destination for thrill seekers of all ages, including families, work groups and even pre-wedding parties.

“When we launched, we really introduced aerial adventure to Adelaide and we’ve made it accessible to a wide audience. It’s the ultimate in outdoor fun,” Mr Grundy says.

Mega Adventure caters for all ages and abilities and provides the ideal day out for families wanting some screen-free outdoor fun over the school holidays. Online bookings are recommended.

The Giant Swing has a minimum height restriction of one metre, but never fear littlee’s can have their fun on the MegaBounce instead.

Mega Adventure is open daily from 10am to 6pm and is located within Adelaide Shores, on the corner of Military Road and Hamra Avenue, West Beach.