REVIEW: The Alphabet of Awesome Science 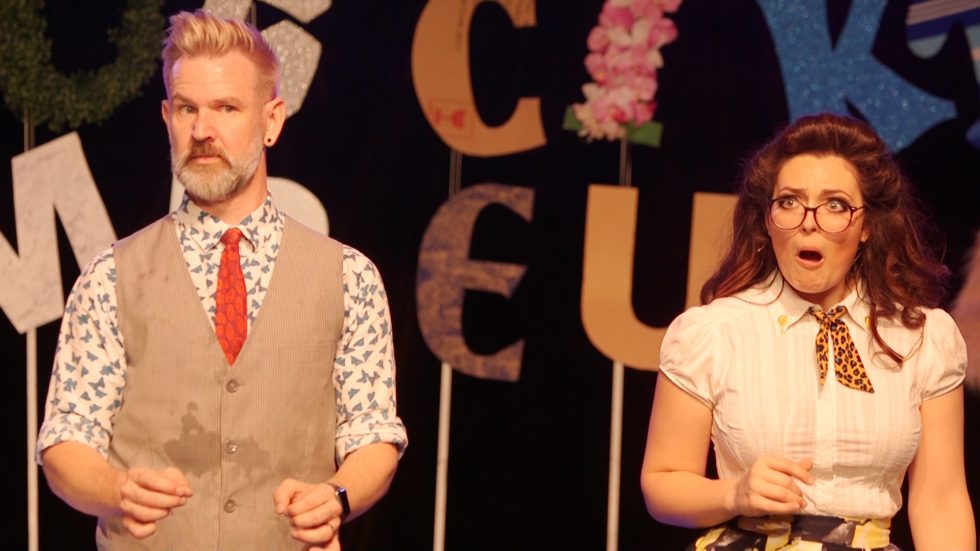 Calling all word nerds and science geeks … this is the show for you!

Professors Lexi Con and Noel Edge (real names: Emma Bargery and David Lampard) are the stars of the kids’ show, The Alphabet of Awesome Science.

Their show’s premise? To conduct 26 experiments onstage, relating to 26 big ‘sciencey’ words, in 52 minutes – while a timer counts down.

As they say, every show is completely different as audience members are asked to call out letters at the start and this order dictates how the show will run.

Emma reminded me of a cartoon character like Inspector Gadget’s Penny as she dashed about the stage in her yellow Cons, yelling ‘next word!’ and reeling off facts. David, meanwhile, was more like The Nutty Professor, bringing the poo and wee gags, and Dad jokes. (For one experiment, surrounding a fog-filled bottle, he quipped: “I tried to catch the fog the other day, but I mist.”)

There were experiments involving smoke ‘doughnuts’, a fire tornado, and an oversized straw sprinkler (which doused the crowd). Many of the stunts drew oohs and aahs from the young attendees.

Along the way, I learned some fun facts, like that the average adult expels 2L of urine per day, that some of the grossest-sounding English words are ‘pustule’ and ‘yeast’ (I’d concur), and that, thanks to physics, a balloon won’t burst on a bed of nails.

Kids in the crowd also got sprayed with water-blasters and had to choose between a Bluey or Elsa toy getting their own drenching.

Some of the science chatter onstage went over my head – many of the words could’ve belonged in Pip Williams’ The Dictionary of Lost Words, they were that obscure. And a few of the experiments I would’ve liked the duo to have lingered longer on, but, alas, that wasn’t the point of the show.

The Flamingo tent was packed to the gills – or, perhaps, the feathers – for the performance. (Best to go for the tiered seating if you don’t want your littlies complaining about their view.)

If biology class at school had been more like this show, I might’ve paid more attention. Fun and educational … who knew?

THE ALPHABET OF AWESOME SCIENCE