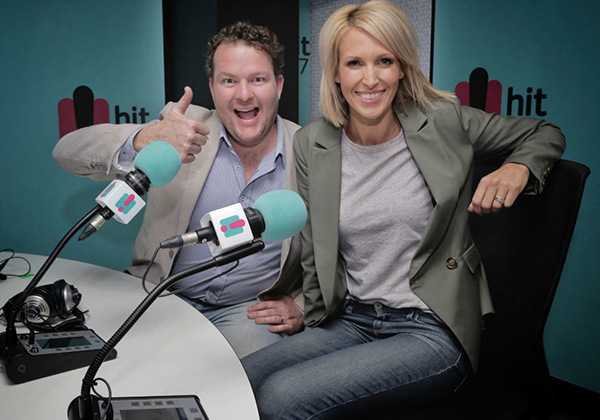 Grab the popcorn folks, this could get interesting.

I am about to embark on an experiment of personal endurance.

Or stupidity. Or both. I have a lot on my plate, as my mother would say. And I’m going to bite off more than I can chew from that buffet-sized meal and chew hard for a bit. From next year I’m going to add a breakfast radio gig on hit107 to my schedule.

As a mother of three, I gure I already have proven quali cations for the sleep deprivation. It will be like having a newborn again, navigating that fog of fatigue. And women are the queens of multi-tasking right? So how hard could it be?

Well, we had a run of radio rehearsals recently and to be honest, things could have gone better. In my defence, the degree of difficulty was high. Turns out my husband wrote down Run the New York Marathon twice on his bucket list and his second crack just happened to coincide with my first week of 4am alarms.

So, I was faced with a perfect storm of new job / solo parenting / limited sleep. I figured I had just enough mental and physical strength to survive the week if everything went to plan.

NARRATOR: Everything did not go to plan.

You know what starting a new job is like? When you don’t know how anything works? I couldn’t even decipher the elevator system on day one. I asked a bemused businessman how to get to level 13 when the key pad only went to 9.

Soooo it turns out you need to press the 1. And then the 3. I wanted to say sorry Mr Bemused Businessman but I HAVE A LOT ON MY PLATE RIGHT NOW.

As well as learning a confusing new elevator, I need to return Frankie’s swimming permission slip today because it’s overdue and I have to stop at the supermarket on the way to school because it was Milla’s birthday on the weekend and she wants a packet of Freddos to share with the class in lieu of homemade cupcakes, also Grace has just been dumped by her boyfriend and I’m managing her emotional wellbeing the best I can without catastrophizing the break up.
/ 10

Oh, and my husband is running his second mid- life crisis marathon. In New-York-freaking-City. But I didn’t say that of course. I just pressed the 1 and the 3 and was on my way, hoping to never set eyes on Mr Bemused Businessman ever again. Let’s just say by the end of the week I was in the foetal position.

So why am I doing this then, you may ask?

Well after 20 years earning my stripes in the media industry, here was an opportunity that may not present itself again. An opportunity to challenge myself in radio, a medium that I have always loved. To pursue new skills and experiences.

And an opportunity to try to make a dent on the mortgage and get ahead. Is it unusual for a woman to admit she wants to secure her family’s financial future? As far as we’ve come, I feel like this may still be slightly taboo.

I’m going to say no to the superfluous stuff, my downtime with my family and my friends will be precious and prioritised.

But, the truth of the matter is, I have no idea how I’m going to do it. There will be plenty of routine-tweaking in the first twelve months to try to get the balance right. Maybe I’ll fail. There’ll no doubt be those who experience a sense of schadenfreude if I do.
But if you never try something for fear of failing, would you ever achieve anything of worth?