Olivia Williams: A week ago, my mum died 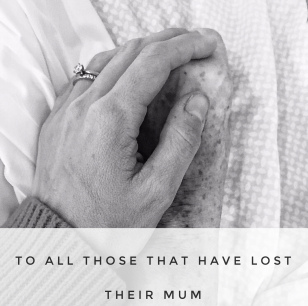 In the darkened hours of the night when sleep won’t find me, but tears in the shape and colour of my memories haunt me, I have trawled the internet for articles on how to somehow cope with this so physical a loss of the woman who shaped me.

As it happens, there are a lot of women out there on the world wide webstergram who have lost their mums, and yet somehow this is no solace, because when it’s your mum… it’s different. The world is changed. Colour is somehow less vibrant. Laughter slightly more hollow. You keep on going, because you have to, because you too are a mum… and mums never stop being mums.

Until all of a sudden, they’re gone.

I’ve never been one for advice giving, in fact usually my only recommendation would be to “do the opposite of whatever it is that I decided to do” because mostly, my life decisions land me in awkward social situations, or my skirt flying up on a public road or being heavy-handedly escorted out of McDonalds. But all the articles I have read, written by other women who have lost their mums, were painted with the retrospect of a few months, years even. When people have managed to compose themselves slightly, when the edge of the loss has softened a little, when life has quietly returned and acceptance has been garnered, as much as one ever can.

But as I sit here and write this, not quite a week has past since my mum left us, and my pain is still both expansive and suffocating. And, whilst it’s not much, this is what I can offer anyone who, one day, is looking for some midnight solace because all of a sudden they are rudderless in a world where once they were someone’s daughter, and now they are not.

1. Apparently “just fuck me up” is not a proper coffee order at McCafe. #whoknew

2. No one is going to know what to say to you. Because there is no right thing to say. Losing a mother is, broadly speaking, unfamiliar terrain to navigate for women our age, so very few people will be able to offer you anything but commonplace platitudes that won’t seem to scratch the surface of what lies beneath. The person saying them to you usually knows this. It’s just enough that they care and they are trying, because they love you. And it’s that love from those around you that will get you through this. At least that’s what I’m telling myself. For me at least, the first wrong thing anyone said, was to not say anything at all.

3. Strangely enough, there are actually a handful of other wrong things that people might unexpectedly say because, and this comes as no surprise to me, some people are assholes. I had people less than 24 hours after my mum passed asking me what was “going to happen to her body” and “will there be a coronial inquest” (she died of an illness she wasn’t thrown off a cliff). I understand that some people have practical and pragmatic brains. Generally speaking, I don’t like these people. Unfortunately, you can’t avoid everyone you don’t like.

4. When your mum dies, you feel like a child again, and simultaneously like the oldest version of yourself.

5. You just need to do whatever you need to do to keep yourself sane. For me, it’s been camping on the couch in the living room all night watching 90 Day Fiance on catch-up because it’s the only thing in those midnight hours that keeps my thoughts at bay. This may or may not involve double coated Tim Tams.

6. You’ll probably get angry at random stuff. I have found myself yelling at the car radio “I don’t want to listen to this fucking song!!!” which had precisely nothing to do with the program director at 107.1 and everything to do with the fact that I hate the world right now and if that leaves me feeling personally victimised by Post Malone, then so be it.

7. All of a sudden you are a member of a club you didn’t know existed and you never wanted to be a part of. No one’s lining up to be a member of the “lost my mum” club, let me tell ya. And yet somehow this sorority does offer an understanding that even your closest friends might not be able to offer you. And these people know that this pain just doesn’t go away in two weeks. These are the people I imagine myself calling on in a months time, or two months time, when the world has moved forward and I am still somehow struggling with my new reality.

8. You’ll look for signs that she’s still with you. Some days will bring them. Some days won’t. If you’re anything like me, you’ll cling on to every little breath of wind, or rustle in the leaves, or unexpected birdsong that might mean she’s watching over you and saying silently I still see you. I’m still here.

9. There will be gifts that this brings to your life. She will give you these things. Whether it’s that your brother and you will become closer because of it. Whether it’s that it solidifies the love you have for your step father. She will not leave this world for nothing, she will leave knowing these blessings will come in her wake, because she loves you and she’ll never stop making sure you know it.

10. If you have young kids, like I do, you won’t get to just… grieve. Because there are shoes to be put on and lunches to make. Sometimes these distractions will be merciful and other times you’ll wish for just a minute to cry without someone needing you to wipe their ass for them.

11. Your children’s grief will make your heart catch. When your three year old is drawing a picture and she says quietly “and this is granny” and you feel the loss as if it were for the first time. They’ll also say stupid shit like “mummy is crying again because granny’s dead”. Because they’re kids. And kids say stupid shit. And it’ll make you laugh. And laughing is okay to do. Because it’s what she’d want you to be doing.

11. You’ll feel jealous of other people who still have their mums. This one has been hitting me hard this week. I resent grandmas in Kmart pushing their grandchildren in a trolley. This is a new emotion for me. One that made me spend $115 in Kmart this morning in the hopes that it would make me feel better about it. It didn’t, but I now have another denim jacket to add to my extensive denim jacket collection and a new pair of poorly made boots. My husband will be thrilled.

12. Something will always be missing. Even merely a week since it happened, I know this to be true.

My body, born of hers, has acutely felt the physical loss of her. Her smile. Her laugh. Her voice down the end of the phone. The touch of her hand.

Like I said, I don’t give advice, but if I were to, to those of you still blessed with your mothers, it is this;

Have meaningful conversations. Take the photo. Answer the phone call. Say I love you whenever the mood strikes you. Remember what she was like when you were little and remind her that you remember.

I have been wracking my brains as to what are the best words, what is the best tribute for a woman who changed my life, made me an inordinately stronger person, emotionally challenged me just enough to make me funny but not enough to cause permanent psychological damage [lol], and who’s loss will be an incalculable lasting blow.

And then, as if she was whispering it into my ear herself, I realised…. I am her tribute.

My children are her tribute.

Our successes. Our laughter. Our happiness. Our memories. And everything we do from hereon in that would have made her proud.

We… We are her tribute.

I love you mum.