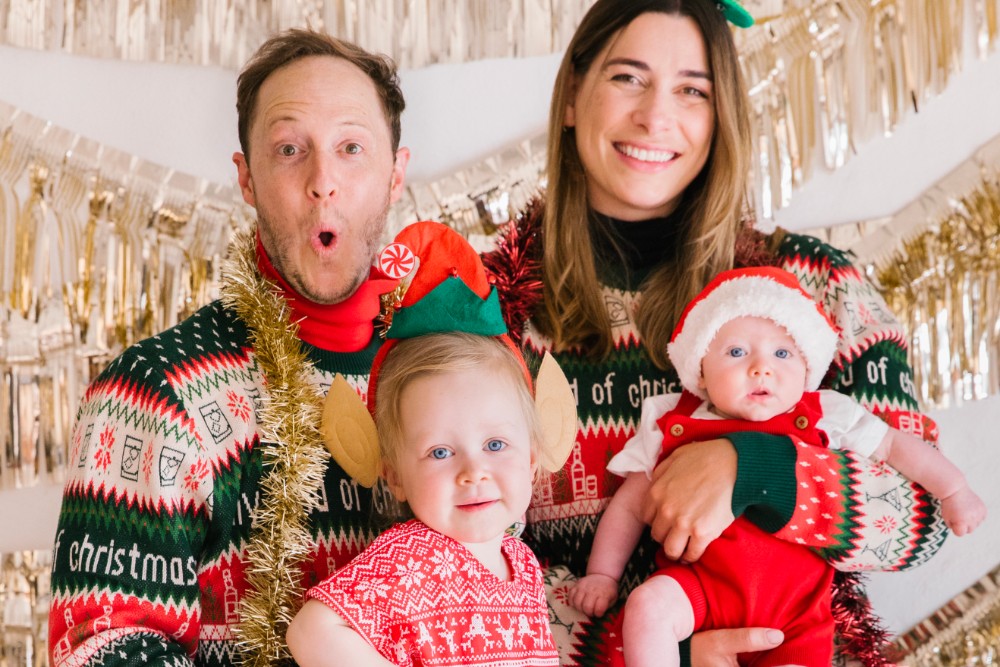 Chances are you’ve seen one of Comedian Josh Hawkins’ viral social media posts clocking up the likes and shares on Instagram. The internet just cannot get enough of @hijosh…and neither can we! For the uninitiated, Josh is the rad-dad and funny-guy who’s basically made a full time job out of recreating his baby daughter’s milk drunk facial expressions on the gram, garnering not thousands…but millions of views. The same guy who’s the comedy genius behind The Bachelor and Married at First Sight lip reading videos that have just about a million shares a minute across social media when the shows are airing and —in between all that— is also an everyday dad of two and loving husband to wife Catherine, who he says makes it all possible!

We chat with Josh and Catherine about their recent move to Adelaide, how life has changed since welcoming a second baby girl into their lives, and just how many of Josh’s jokes Catherine never lets see the light of day!

You guys moved from Sydney to Adelaide in 2020, how has that transition been and how does Adelaide compare to Sydney life?

The apartment below where we were living in Sydney started doing renos and it was so loud that we packed up all our things and two weeks later we were in Adelaide! (No mucking around here) and oh my goodness we are SO GRATEFUL that we made that call seeing what’s happened in Sydney this year.

Apart from missing our friends, we’ve had no regrets! Sydney is beautiful but complicated. Adelaide, well she is just so practical haha. We are closer to family here and have a backyard now, win win! (Do I need to mention Adelaide being the third most liveable city in the world?! It’s those beautiful Malls Balls).

You’re a dad of two now, how has life changed since adding another little person to the brood?

Daddy of daughters! Crazy to think just 3 or so years ago I’d never been more single in my life. Now I’m married, 2 kids and moved interstate, wild times.

Initially after having the second baby, I bonded more with our first child because I was looking after her while my wife looked after the new one and recovered. That was a really special time to get closer to her. And yeah, I think it’s just widened our capacity to love another little human being!

Your wife Catherine and daughters Billie and Bobby all feature in your hilarious content… do your kids often provide you with the most random comedy gold?

Billie, our two-year-old, is just a funny kid! When you have a kid, you assume it’s like every other kid but quite often she does something and I think “you’re totally trying to make me laugh right now!” That’s her personality, full of joy, quirky and funny. So, I guess like any parent it’s inevitable that I share my kids and family on social media and I can confidently say that people only follow me for Billie content now!

A little birdie told us that former Bachelor Matty J helped you land your wife, Catherine! Tell us about what happened!

Matty J’s involvement is twofold. Catherine and I met because I was doing Bachie Recaps on Instagram during Matty J’s season and Catherine and her housemate would watch the recaps. One day she replied to one of them and that’s how we met.

But more specifically, after a few months of us getting to know each other as friends (so mature) I asked her out on a “romantic date”, she reluctantly agreed. For me, I had one shot to “romance the heck out of this girl” otherwise we would’ve just stayed friends forever. So I went all out! I organised for her to get a text message from Matty J and Laura (who I’d never met by the way);  it was a video of them wishing Catherine a happy first date and that I was such a catch… and it absolutely set the tone for the rest of the night. And hey, here we are with two kids, so it worked! Thanks Matty!

Catherine, does Josh run his jokes past you? Have you ever binned any of his gags that will never see the light of day?

He generally runs most things past me, and I give it the final approval. There are only a few things that will never see the light of day, like his idea to play the character of a baby in the womb. Josh filmed it, we both watched it back and were like nah, no one should ever see this!

I’ve become more involved in Josh’s content. I started off as a fan, now I find myself doing it all; props manager, hair and make-up, quality control, choreographer, caterer, I often film things for him and, if you’ve ever seen his ‘Married at First Sight’ lip reading videos, all the best jokes are mine 😉

Catherine, we spied on Instagram that you have an incredible singing voice – when’s the album release? 😉

Fun fact, I never really enjoyed performing! I love music but writing and performing don’t really do it for me. I love finding talent though so in Sydney I was teaching singing and I loved that side of it, finding someone with talent and helping them grow in it. For now, I’m resolved to being a lover of music at home with the family.

Josh, how long does it take for you to land all those IG trickshots really?

Ah yes, the first viral video of me throwing things into other things. Let’s just say I was very single back then, had oodles of time on my hands. It was absolutely a waste of time and I have no regrets. It’s 20 percent skill, 80 percent patience.

Oh gosh! You know, our very first conversation on Instagram was about the trashiest reality TV shows we’d ever watched.
At the moment Survivor is at the top, then Love on the Spectrum, we got pretty into SAS Australia, Matty J’s season of The Bachelor (#ripbachie), not even gonna rank MAFS.

And at the bottom of the pile, the trashiest reality TV ever made was a show called “There’s Something about Miriam” and “Dance you’re A** off” which was axed after one episode. Worth a Google!

Let’s talk Christmas! What are your plans for Christmas this year? Any fave family traditions?

This will be our first Christmas in our own home! No plans just yet but all the family live within 3 minutes of each other so I’m sure we will see them lots.

We don’t have a Christmas tradition yet, but we did start a New Year’s Day tradition where  we wake up just before sunrise, find an amazing spot near the beach and cook pancakes. We might’ve missed the last few years because of newborns but we are keen to bring that one back!

For more hilarity from Josh and Cat: