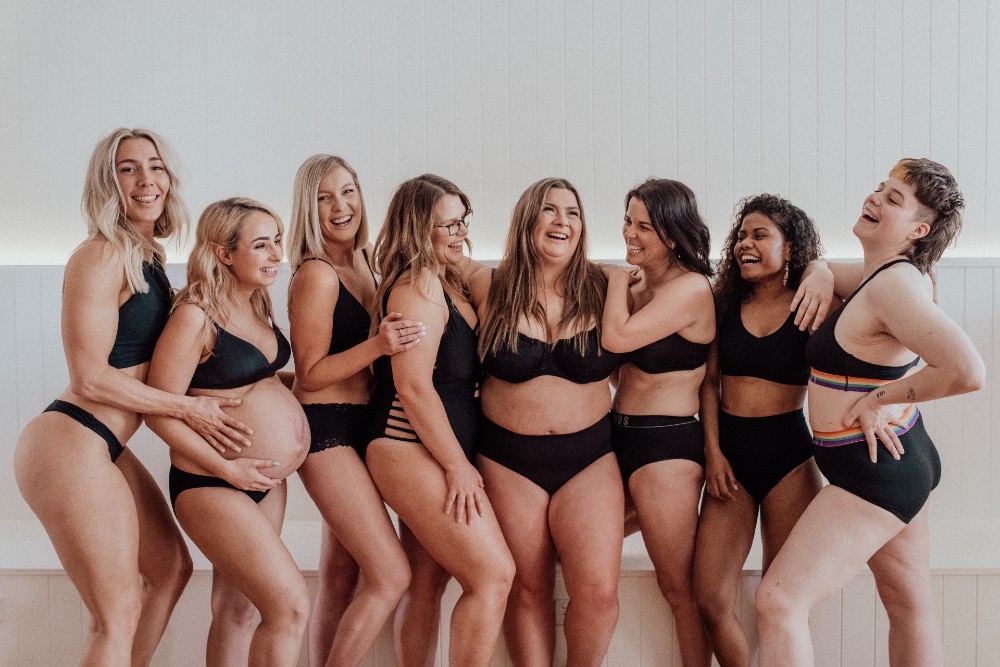 Local Adelaide women, Louise Agnew and Re Wetherall are passionate about making a change in how women see themselves and each other and came together to create the EveryBODY is Beautiful self love campaign; an incredible celebration of women and people in all their spectacular shapes and sizes.

After having her second child, Adelaide photographer Louise Agnew’s body had gone through a lot of changes. She’d finished breast feeding and lost 32kgs. She’d seen the skin she was in change elasticit and texture and with our old mate gravity kicking in, but she also found herself both stronger and healthier. Louise celebrated these changes; she had learned so many new things about the body she lived in and felt truly empowered in the idea of embracing what her body could do.

So, when local Beauty Therapist, Re Wetherall, contacted Louise telling her she’d noticed many of the women who would strip down for a spray tan would lead with apologies about their bodies, and said she wanted to do something to prompt a shift in this rhetoric, Louise was all in.

The two women, passionate about making a change in how women see themselves and each other, came together to create the EveryBODY is Beautiful self love campaign; an incredible celebration of women and people in all their spectacular shapes and sizes.

We chat with Louise about how it all came together on the day and how this campaign has been such a positive force in the lives of so many.

EveryBODY is beautiful self love campaign

How did you come across the individuals taking part in the photoshoot – what were their reactions when you first asked them to take part?

We each knew some of the people personally, or had seen them about either on social media or in our community. We wanted to make sure we included lots of bodies with different shapes, ethnicities, ages and stages of motherhood.

We were honoured to have a gender fluid person included in our campaign, creating more discussion around LGBTQIA+, and some of the girls had autoimmune issues they wanted to raise awareness about. We really wanted to ensure that the message of everyBODY is beautiful, was represented.

Everyone was super keen to be involved, but of course a little nervous about stripping down to their undies!

The images are incredible – what was the vibe on the day of the shoot?

We were lucky enough to be provided with some space to shoot in at local cafe, Presto Eatery. Re and I were joined by the eight people involved and makeup artist Jess Creek. Everyone was buzzing with nerves but we had some bubbles, a platter and some good tunes and that eased the anxious shakes.

When everyone stripped down to their undies, not one person apologised for their body and there was the most magnificent, contagious and electric energy in the room! Everyone was so empowered and it really felt like such a celebration of the bodies in the room.

You are so clearly passionate about the subject of body love, where do you think this passion comes from?

I have lived in many different bodies – ranging from a size 8 to a size 22 and what I have noticed is that how you feel on the inside about yourself, ultimately is how you shine from the outside. I have felt depressed about my body in all of those sizes, and I have been confident in those sizes too. I have copped flack about my body at most sizes, so that has told me that no matter what your body looks like, someone out there will have a problem with it. It’s up to you to embrace and celebrate your body and create a positive dialogue about it. I don’t want my own children to feel a pressure from society to be that “one” body type that saturates the media. I want my children to love and embrace what they have. I want them to celebrate and accept what their friends have. Life is so short, our body is but a shell that carries our soul around. It doesn’t make you the person you are. Look after your body and enjoy the time we have with it.

What’s been the reaction to the campaign?

The reaction has been so incredible, beyond anything we ever imagined. Those involved have said they feel so empowered by the shoot and the images. Some have said they feel honoured to have been asked to be a part of the campaign and that it has helped them to embrace and celebrate their bods.

We have received an excess of emails, inboxes and messages to congratulate us on this movement, which is so lovely. Many women have said it has helped them to embrace the skin they live in. It’s really encouraging to see real bodies in social media, but also real bodies that you know personally.

What is the overarching message you’d like people to take from this campaign?

The physical attributes of our body do not define us. Beauty comes from the inside and radiates out. Focus on the things that we can do in our short lives, with the bodies we have been given, and not what they look like. This is such an important message for our children and for their future(s).