Danielle Symes: My kids are becoming numb to Christmas… 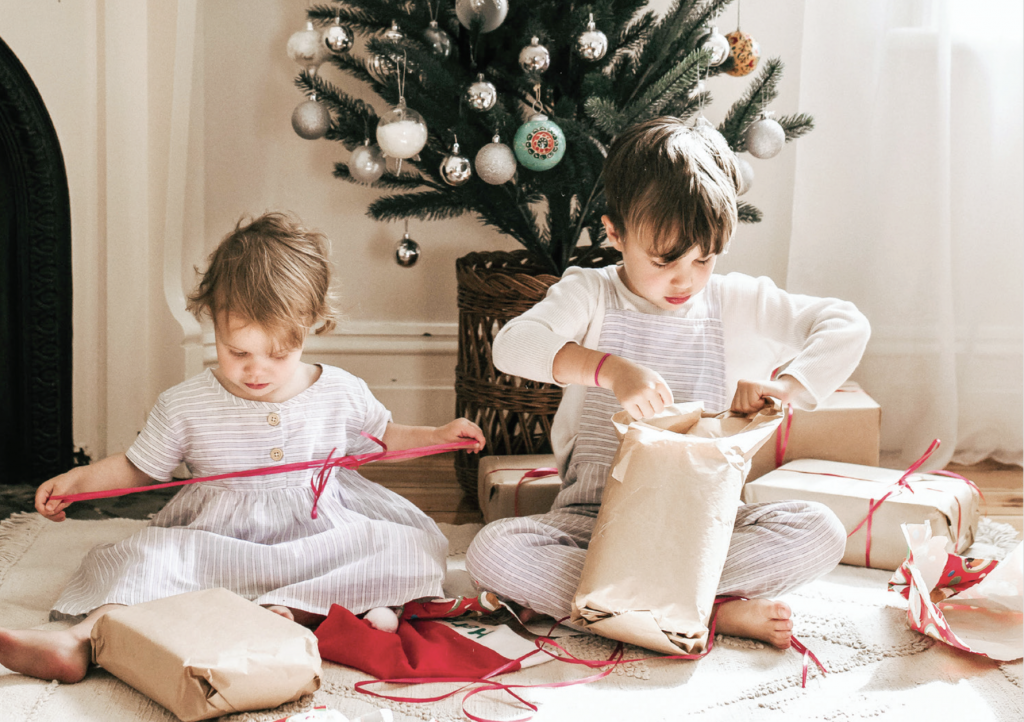 Stop the HOARD and ignite the BORED

Incase you weren’t aware it is only a few weeks till Christmas. My local Woolies is resembling the Magic Cave and Harpers kindy creations are coming back substantially more glittery and festive. Christmas has never lost its sparkle for me, not even as a kid when I saw a doll in my mums closet only to discover that same doll in my Christmas sack a few weeks later. I’ve carried that enthusiastic spirit into my adult years and I am the type to get as much longevity out of my Christmas decorations as possible, hanging them promptly on the day of the Christmas Pageant and not removing them until well after New Years. I watch Love Actually annually, I take great pride in my gift wrapping abilities and now that I have kids you betcha I’ve taken on every tradition known to Pinterest. I. Love. Christmas. I love it! BUT!

“In recent years, amongst the egg nog and the Michael Bublé, I have noticed a certain trend and it’s one that is hard to miss…and I mean this literally because you genuinely can’t miss the growing pile of toys and colour that slowly takes over the lounge room floor come Christmas morning.”

When we first had Harper he was only about 4 months old for his first Christmas and he received the equivalent to the 3rd and 4th aisle of Toys R Us. He had only just started to hold his own head up and he had already been given his first bike! I remember coming home after visiting both mine and Brad’s families for the day and feared opening our car boot. Genuine fear of being buried alive by plastic, but also the fear of not knowing where the hell I was going to put all this stuff! I think it’s after your kids first Christmas that most parents realise they have to sacrifice an entire area of their house and ‘the office’ is officially renamed ‘the toy room.’ Don’t be fooled though… that room doesn’t actually get played in, the toys are not concealed neatly to that room. God no! They are taken out daily and strewn across the house and it is then your job to pack everything away at the end of every night…. Or you just learn to incorporate bright yellow, blue and red into your decor.

Over the years I have slowly built up the balls to ask both sides of the family to limit their toy buying intake and they always agree at the time but come Christmas all that goes out the window as 87 different presents are hastily ripped open and thrown to the wayside resembling that scene in Willy Wonka where Veruca Salt’s factory workers are trying to find her a golden ticket. And that for me is the bigger issue at hand here. It’s not so much the excessive toy buying, I get that people love to buy gifts, I do too! For me, it is witnessing my 5 year old go from gift to gift, barely taking in what he has just unwrapped as he moves from one to the next. We have always taught our son to be grateful and to say thank you for any gifts he gets but I can’t help but feel like the excessiveness is creating a numbness.

I remember as a little kid you would go see Santa and there was always one gift in particular that you really really wanted that you would ask for. Your mum would stand nearby taking notes and hit up the late night shopping a few weeks later. Come Christmas Day there was that hope, that longing for the thing you asked Santa for, and the ecstasy that followed when you ripped off one tiny corner of the wrapping paper and saw that it was the Baby Alive doll packaging was a happiness you would then hold onto for weeks! I played with that leaky doll that wee’d itself for hours on end and she wasn’t discarded after a few weeks.

“Back then we got one gift that we genuinely wanted and we treasured it. Yes, we would get other small gifts in our Santa sack but that one big ticket item was not trumped and overlooked a few weeks later… or worse yet, that day.”

I think one of the biggest issues is that everything is so cheap these days it’s hard not to think absolutely nothing of buying a whopping big truck that only cost $12 at Kmart. And then because it was only $12 you think ‘well that wasn’t much, I should get something else to go with it….’ Before you know it your trolley is full, you’ve barely broken a fifty and it only dawns on you that you possibly went overboard when you have to wrap everyone of those damn gifts.

So, this year my husband and I came up with a resolution, a new tradition that we hope sticks because otherwise the only other option is to sell our house and find a bigger one to store all the crap we are accumulating… which may become an expensive habit as the years go on.

Our plan to: Stop the HOARD and ignite the BORED!

I don’t want it to sound like I am trying to take away from the magic of Christmas with these ‘rules’, in fact I hope it does the exact opposite by teaching our kids that Christmas Day is not just a day where you get inundated with presents. Come Christmas morning we will still have all our little traditions such as checking if Rudolph ate his carrot or whether the magic jelly beans we planted the night before have sprouted into candy canes yet; and it’s those things that I hope they get excited by and remember for years to come. Our hope is that we create an attitude of less wanting and more appreciating… and it would just be a bonus if our kids then carried that attitude on for the other 364 days of the year too.